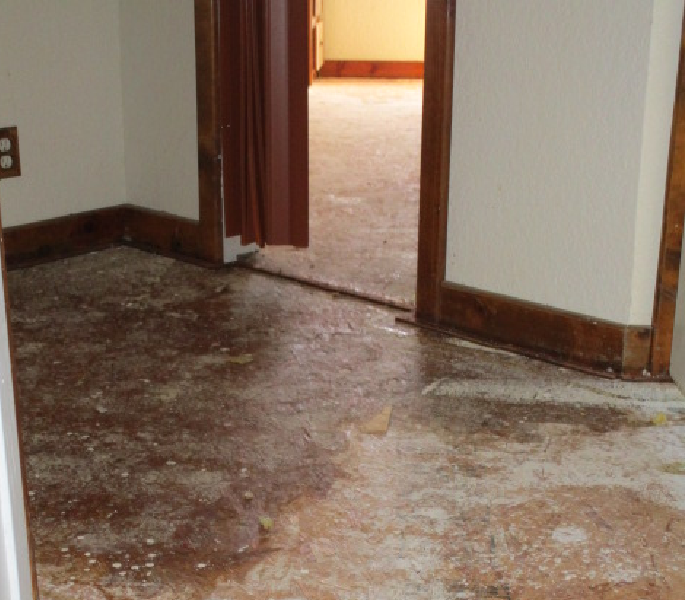 This second floor hall has had the carpet and pad removed after suffering water intrusion during a tornado and heavy rain event.

To the left, not shown, is the door out into the attic where the metal roof was blown off the building.

Water damage from a tornado can come in from the roof or other blown open areas and come down trough the building, as was the case in this home.

Opening the closet door to what had come to look like a patio was quite the experience.

SERVPRO of Waco, a restoration company, lined up the help needed to secure the roof.  We removed the carpet, etc., to get the home on the path to dried out and repaired.

SERVPRO of Waco has been helping folks in the greater Waco area and through out Central Texas through property damage situations since 2001.

There's Water In There? 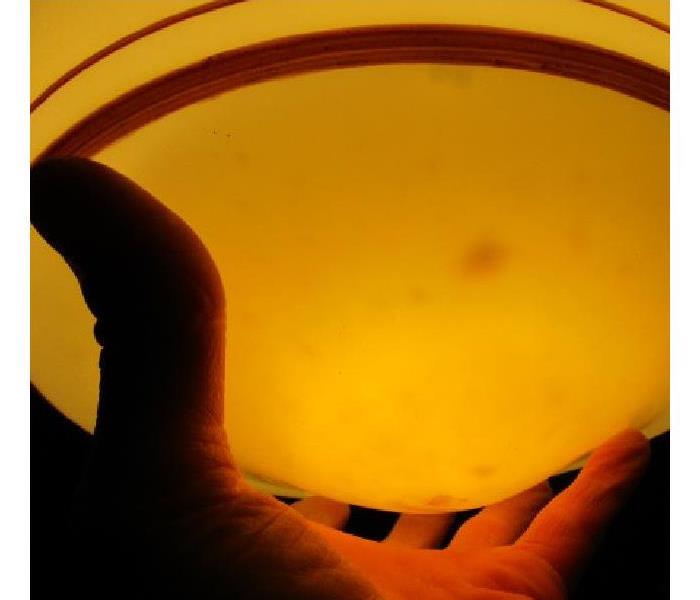 Yes, the Light Globe is Full of Water.

Yes, water from a source above the room or area affected by the water damage can accumulate in the light fixture.

This fixture involved in a Whitney, TX, area tornado and thunderstorm fill up so much with water, it became dim....and warm.  The bulb was heating the water.

Water can get into a light fixture traveling along wires in the ceiling or attic.  It can also just soak straight though the drywall, etc., right into the globe and hold the water.  Turns out light globes will hold water.

Water will also run along electric lines in the ceiling or attic and drop off at low points or obstacles.  This can produce water spots in the ceiling well away from the main affected areas.  Usually the amount of water traveling the line is small, but problematic.

Normally, the water won't have any real affect on the electricity itself.

SERVPRO of Waco, a restoration company has been helping folks in the greater Waco and Central Texas areas deal with water related issues for 19 years. 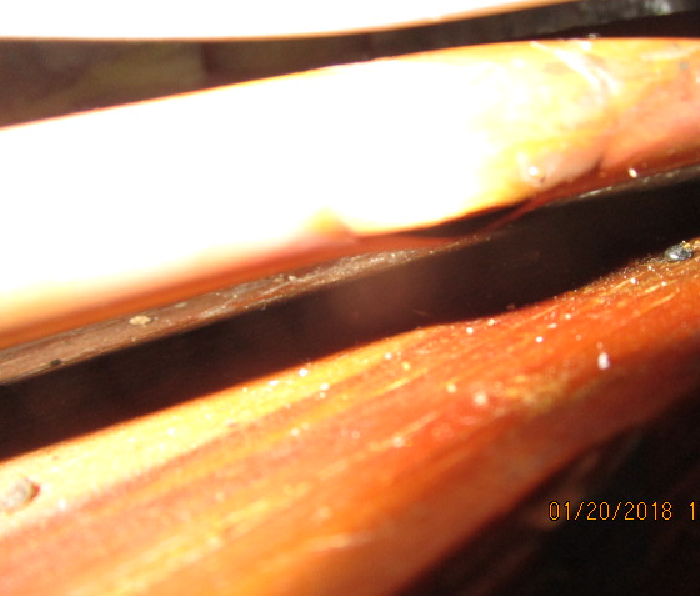 While plastic water pipes can break and separate when frozen, copper pipes often open more as a split.  They can be relatively small sometimes.  However, the spray is strong and puts out a lot of water quickly, though slower than a complete break.

In this particular case, two pipes split open not far from each other.

Apparently a frozen pipe bursting is not a mutually exclusive things among pipes in a structure.

In this McLennan County ranch house near Aquilla, TX a pipe burst open in a bedroom ceiling and the bathroom right beside it.

Unfortunately, it was not discovered right away and much damage was done by the water.

SERVPRO of Waco did the water extraction and water damage drying on this job.

SERVPRO of Waco, a restoration company, servicing the greater Waco and Central Texas area since 2001. 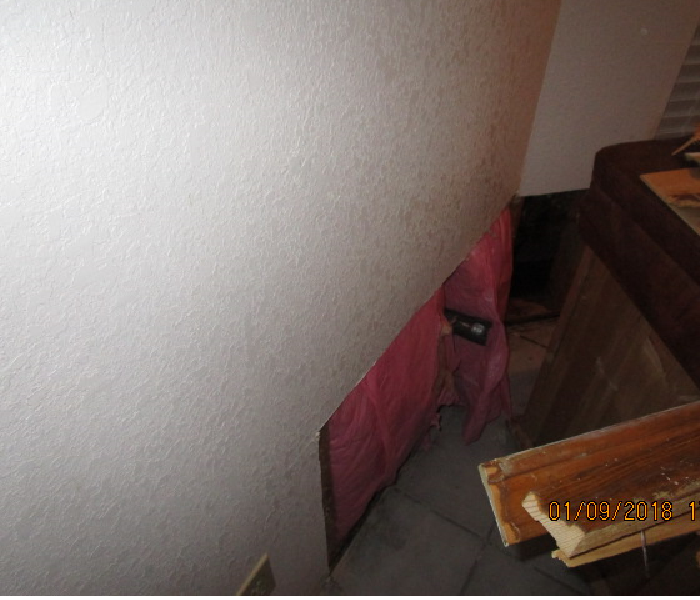 The repair behind the indoor hot tub

Here is what we all need and what we don't need!

This large enclosed porch style room had an indoor hot tub.  Who wouldn't want one of those??!

However, the pipe in the exterior wall from which the water for the hot tub came, froze and burst.  It was pretty much the same as having your outdoor spigot (or hydrant as some call it around here) pipe burst inside the wall.

Of, course everyone was gone at work when it happened and came home to water everywhere.  Maybe some of it went outside too, but it didn't look like it.

SERVPRO of Waco did water extraction of the whole first floor and dried out the water damage.

SERVPRO of Waco, a restoration company, serving the greater Waco and Central Texas area since 2001. 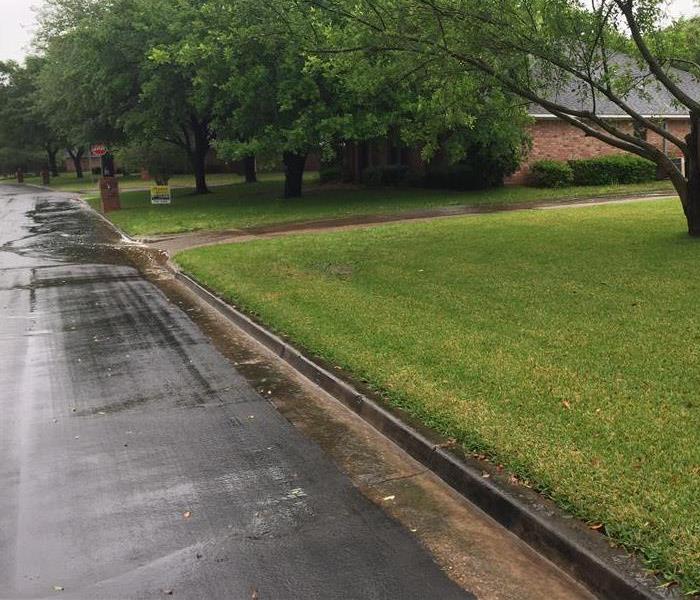 The run off after an extremely quick, heavy rain,

This picture shows the ground water from extremely heavy rain running down the streets and driveways as it makes its way to lower ground and waterways in Hewitt, TX.

Unfortunately, when the ground water gets to the structure walls, the building will not be able to hold 100 % of it back.  In some instances, if one's building is the lowest point or in the direct path downhill, the building will really just slow the water down.  It will inevitably works its way through.

Sadly, unless you live in an area which is a flood plain, insurance will probably not cover the damage.  Ground water.

SERVPRO of Waco can work with you to get this water extracted and damage cleaned up.

SERVPRO of Waco, a restoration company serving the Greater Waco and Central Texas area since 2001.

Behind the Wet Drywall 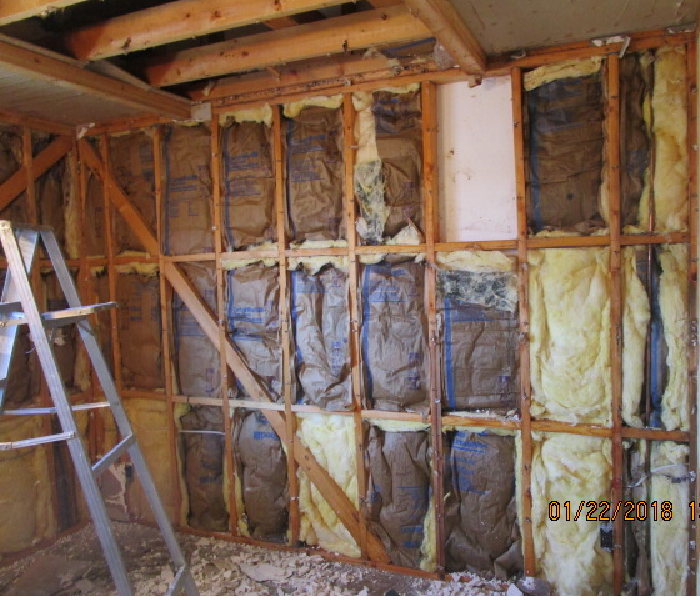 Gravity just brings the water down several ways from frozen pipes in the ceiling.

While the water brought down part of the ceiling in this McLennan County/Aquilla area ranch. it also spread out in about every direction across the ceiling.  Then, of course, down the side walls.

After water extraction, the water damage drying process required removing some materials and letting the basic structure get dried deeper inside.

Some of the materials had to be removed immediately, i.e. the collapsed ceiling, and some was removed after preliminary drying efforts indicated drying was not progressing.

SERVPRO of Waco was able to dry this rambling home in a reasonable time period without extensive demolition.

SERVPRO of Waco, a restoration company serving the greater Waco and Central Texas since 2001.

Waco has dodged a bullet from the hurricane.

Who'd have thought we'd get gentle rains and cool, easy breezes, while just South of us folks are in a real struggle with the weather?

But the storm may turn North and come towards us Thursday or so.

How are things looking for water drainage around your place(s)?

Are the storm sewer openings clear of debris?  Is the drainage ditch clear? Are drain culverts near your place open and clear of debis?

We've had customers who were near awesome storm sewer drains, but the flooding occurred was on trash pick up day and the trash cans, etc., floated down and blocked the storm sewers.

It would be a real drag to have to stand in flood water, in the rain and try to unclog things in the throws of a storm.